In the transaction stage, the government selects the private party that will implement the PPP. This process will also determine the effective terms of the contract. This stage follows the structuring, appraisal, and detailed preparation of the PPP described in the previous sections of this module. It concludes when the PPP reaches financial close—that is, when the government has selected and signed a contract with a private party, and the private party has secured the necessary financing and can start deploying it in the project. 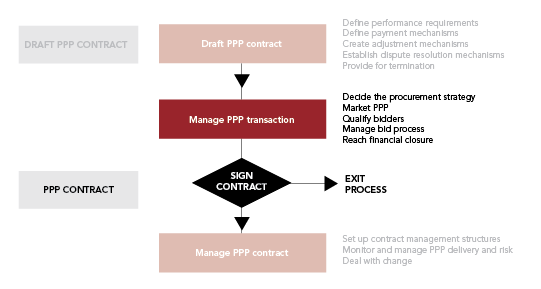 The aim of the PPP transaction stage is twofold:

To the latter end, the process typically establishes some of the key quantitative parameters of the contract, such as the amounts the government will pay or the fees users will pay for the assets and services provided. Achieving these objectives generally requires a competitive, efficient, and transparent procurement process, as outlined in the PPIAF toolkit for PPPs in roads and highways procurement section (WB 2009a) under competitive bidding; in the Caribbean PPP Toolkit (Caribbean 2017, Module 5); and by Farquharson et al (Farquharson et al. 2011, 112) in describing the outcome of the procurement phase.

Since most governments use a competitive selection process to procure PPP contracts as the best way to achieve transparency and value for money, this section assumes a competitive process is followed. In practice, there may be a few circumstances where direct negotiation could be a good option. However, many reasons put forward to negotiate directly are spurious, as described in Competitive Procurement or Direct Negotiation.

A competitive selection process is the recommended route to procure PPP contracts. Key advantages are transparency and use of competition to choose the best proposal—the mechanism most likely to result in value for money. The alternative to a competitive process is to negotiate directly with a private firm.

There can be good reasons to negotiate directly, but these are relatively few—see for example Kerf et al’s guide to concessions (Kerf et al. 1998, 109–110) and the World Bank report on the Framework for Unsolicited Proposals' (WB 2017d) sections on direct negotiation. These reasons include:

Whenever a government allows for direct negotiations under specific circumstances, these circumstances and their associated criteria should be clearly specified in the procurement legal framework. Direct negotiations should only be pursued once suitable safeguards for value for money, transparency, accountability, and public interest have been established and operationalized.

On the other hand, several reasons commonly put forward to negotiate directly with a private proponent of a PPP can be misleading—see the section in PPIAF’s toolkit for PPPs in roads and highways (WB 2009a), Module 5: Procurement on overall principles for procurement. For example, some argue direct negotiation is faster—though in practice, challenges often make the process longer. Often, direct negotiation is also considered when a PPP idea originated from an unsolicited proposal from a private company. However, there are ways to introduce competition in this case that help ensure value for money from the resulting project, as described in Dealing with Unsolicited Proposals. Based on these considerations, some countries do not allow non-competitive procurement processes at all,such as Brazil, under the Federal PPP Law of 2004 (BR 2004a). Elsewhere, direct negotiation may be allowed in particular circumstances. For example, Puerto Rico’s PPP Act allows for direct negotiations if the investment value is under $5 million, there is lack of interest after issuing an RFP, the normal procurement process is burdensome, unreasonable, or impractical, or the technology required is only available from a single company (PR 2009, Article 9.(b).ii).

Managing PPP Transactions describes each of these steps, and provide further resources and tools for practitioners interested in managing PPP transactions.