Potential PPP projects must undergo an appraisal process to ensure that developing and implementing them makes sense. For any proposed PPP project, there are five key criteria that governments should consider when deciding whether or not to pursue a project as a PPP:

These criteria (with some variations) are described in more detail in Chapter 5: “Public-Sector Investment Decision” in Yescombe’s book on PPPs (Yescombe 2007); Chapter 4: “Selecting PPP Projects” in Farquharson et al's book on PPPs (Farquharson et al. 2011), Module 3 of the Caribbean PPP Toolkit (Caribbean 2017), and Chapter 1: “Project Identification” in the EPEC Guide to Guidance (EPEC 2011b).

The United Kingdom has developed a methodology for project assessment called the Five Case Model. The methodology can be applied to every type of project, whether PPP or not. It provides a comprehensive framework for assessing projects. It consists of looking at a project through five different lenses, or cases, as follows:

Guidance on this can be found in the United Kingdom Green Book (UK 2011a) and Five Case Model methodology (Flanagan and Nicholls 2007).

Appraising PPP Projects shows how project appraisal fits in to the overall PPP process. Initial assessment against each criterion is typically done at the project identification and initial screening stage, as described in Identifying PPP Projects. Detailed appraisal is usually first conducted as part of a detailed business case alongside developing the PPP project structure, as described in Structuring PPP Projects. For example, assessing the value for money of the PPP depends on risk allocation, an important part of PPP structuring.

PPP appraisal is typically re-visited at later stages. The final cost, affordability and value for money is not known until after procurement is complete, when the government must make the final decision to sign the contract. Many governments require further appraisal and approval at this stage. 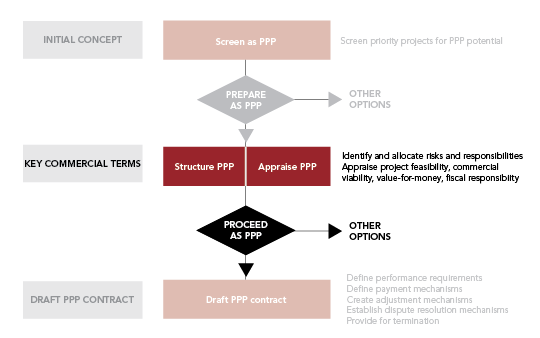