Concessions, Build-Operate-Transfer (BOT) Projects, and Design-Build-Operate (DBO) Projects are types of public-private partnerships that are output focused. BOT and DBO projects typically involve significant design and construction as well as long term operations, for new build (greenfield) or projects involving significant refurbishment and extension (brownfield). See below for definitions of each type of agreement, as well as key features and examples of each. This page also includes links to checklists, toolkits, and sector-specific PPP information.

A Build Operate Transfer (BOT) Project is typically used to develop a discrete asset rather than a whole network and is generally entirely new or greenfield in nature (although refurbishment may be involved). In a BOT Project the project company or operator generally obtains its revenues through a fee charged to the utility/ government rather than tariffs charged to consumers. In common law countries a number of projects are called concessions, such as toll road projects, which are new build and have a number of similarities to BOTs .

In a Design-Build-Operate (DBO) Project the public sector owns and finances the construction of new assets. The private sector designs, builds and operates the assets to meet certain agreed outputs. The documentation for a DBO is typically simpler than a BOT or Concession as there are no financing documents and will typically consist of a turnkey construction contract plus an operating contract, or a section added to the turnkey contract covering operations. The Operator is taking no or minimal financing risk on the capital and will typically be paid a sum for the design-build of the plant, payable in instalments on completion of construction milestones, and then an operating fee for the operating period. The operator is responsible for the design and the construction as well as operations and so if parts need to be replaced during the operations period prior to its assumed life span the operator is likely to be responsible for replacement.

This section does not address the complex array of finance documents typically found in a Concession or BOT Project. 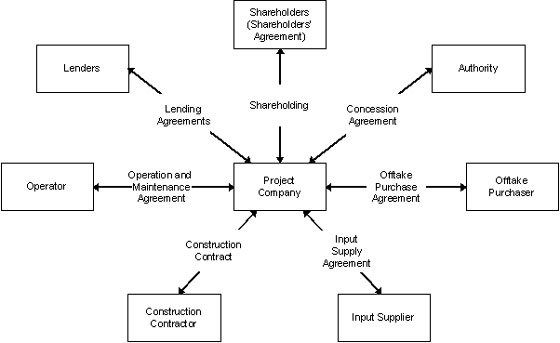 Each project will involve some variation of this contractual structure depending on its particular requirements: not all BOT projects will require a guaranteed supply of input, therefore a fuel/ input supply agreement may not be necessary. The payment stream may be in part or completely through tariffs from the general public, rather than from an offtake purchaser.

For more information about finance agreements, visit the Finance section.