Many governments set out a process that must be followed to develop and implement every PPP project. Standardizing the PPP process helps ensure that all PPPs are developed in a way that is consistent with the government's objectives. It also helps achieve coordination between the various entities involved.

Typical PPP Process shows an example of a well-defined PPP process. The process is broken down into several stages, in which the PPP is iteratively developed and appraised. At each key stage, approval is required to proceed. There are two reasons to use an iterative approach to developing a PPP project. First, it enables timely involvement of oversight agencies in approving projects, as described further in Institutional Responsibilities: Review and Approval—poor projects, and poorly-defined projects, risk undermining a whole PPP program. Second, it avoids wasting resources developing weak projects. Developing a PPP project is costly—early checks that the project is promising can help ensure development budgets are well-spent. 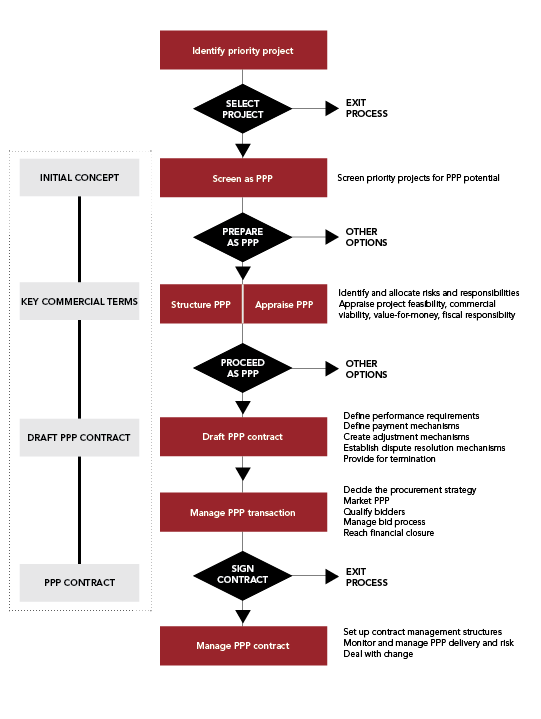 Developing and implementing the PPP then involves several stages:

An alternative to the government carrying out all these steps is to allow private companies to identify and propose PPP projects. Some governments have introduced specific requirements and processes to ensure that these unsolicited proposals are subject to the same assessment, and developed following the same principles, as government-originated PPPs. Dealing with Unsolicited Proposals provides details and examples.

PPP Cycle describes the PPP process in detail, setting out options and providing information and guidance for practitioners on each stage. The following provide examples of how the PPP process is defined in a range of countries: