A PPP project is a specific type of public investment. Most governments have systems and standard procedures for reviewing and approving capital investment projects: to ensure all projects are effective at meeting strategic objectives; provide value for money; and in line with fiscal priorities. Because PPPs do not necessarily require capital investment by the government, they may not automatically be subject to these approval rules. Many governments therefore define similar review and approval requirements for PPPs. See Example PPP Approval Requirements for some examples.

Often, several decision points are created, allowing weak projects to be stopped before they consume too many resources, or develop a momentum of their own. This is illustrated in Typical PPP Process. These iterative reviews are sometimes called gateway processes. Monteiro's article in IMF’s book on PPPs (Schwartz et al. 2008) describes a typical gateway process, and how this process works in Portugal. At a minimum, formal approval is typically needed to enter into a PPP transaction. Because the final cost of a project is not known until procurement is concluded, final approval may be needed before the contract is signed. The South African Gateway Process for PPPs describes this gateway process in South Africa (ZA 2004a, Module 1).

Finance ministries typically have a leading role in this process, given their responsibilities for managing government resources, and (often) economic and fiscal policy. The IMF emphasizes the importance of the role of the finance ministry in its book on Public Investment and PPPs (Schwartz et al. 2008, 10). In France and many Francophone countries this role is split between the Ministries of Finance, Development and Planning. In a few other countries, another entity altogether has overall responsibility for overseeing the public investment program, and hence may play the same role for PPPs—such as the National Economic Development Agency (NEDA) in the Philippines. Many finance ministries have established special PPP units through which to carry out their filtering and monitoring functions, as described further below.

Other oversight agencies can also have a role in reviewing and feeding into PPP project approvals, mirroring their roles in any major capital investment project. These can include:

These additional reviews can be important checks on the quality and legality of the project appraisal and development process. However, they can also introduce delays at crucial points. Mechanisms for coordination can help. Capacity building may also be needed to ensure these institutions are able to fulfill their roles as they relate to PPPs.

Ultimately approval may be by Cabinet and/or Parliament. Jurisdictions vary as to which entity can approve a PPP. A few countries require legislative approval of large projects. More often, approval may come from Cabinet or a Cabinet-level committee, the finance ministry, or a combination. As described in Irwin's paper on controlling spending commitments in PPPs (Irwin 2007, 113–114), approval power may depend on the size of the project, as is typically the case for other capital investments. 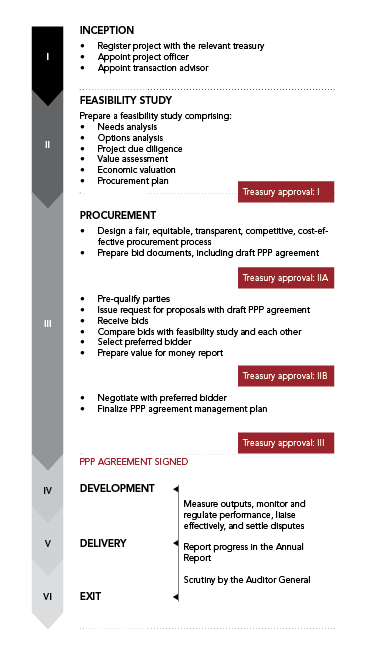 Decision-making for public investment projects is typically articulated around the annual budget process. However, because PPPs often do not have immediate budget implications, specific coordination mechanisms are needed to ensure the projects are integrated into the Mid-Term Expenditure Framework (MTEF) and reviews and approvals proceed smoothly and do not hold up the project development process. In some cases, PPP units are assigned with a coordinating role, as described further in Dedicated PPP Units. Some governments also form interdepartmental committees to oversee each PPP transaction, to ensure the perspectives of oversight agencies are taken into consideration throughout the project development process rather than just at review points.