The World Bank report on the Framework for Unsolicited Proposals (WB 2017d) discusses the need for a clear framework on USPs. Governments must first decide whether to allow USPs as part of their PPP program. This decision should be based on an informed understanding of the advantages and disadvantages of USPs. A government’s decision on USPs need not be permanent. However, the government’s position should be clear and well-publicized to ensure that:

The effectiveness of a USP Policy will be influenced by the wider institutional and political environment for both privately and publicly initiated PPPs. Governments must ensure that the development of their USP Policy is accompanied with:

The success of the USP Policy will be in part determined by the effectiveness of the PPP legal and policy framework. A USP Policy is not expected to replace PPP policies or procurement laws but rather complement them in areas that are specific to privately initiated PPPs. Governments are advised to rely on the standard PPP process for elements that are common to both publicly and privately initiated PPPs.

The purpose of the USP policy is to ensure clarity, predictability, transparency, and accountability for both public agencies and private sector entities. Governments must decide how to incorporate the USP Policy in their existing legal framework. Governments may incorporate a USP policy in various legal instruments, including:

There are multiple ways in which the government may define the parameters of USPs that it receives:

These options are not mutually exclusive and may be combined within a USP policy.

The World Bank report on the Framework for Unsolicited Proposals (WB 2017d) describes a well-defined process to assess, approve and bid out a project from an unsolicited proposal, as illustrated in USP Process Flow. 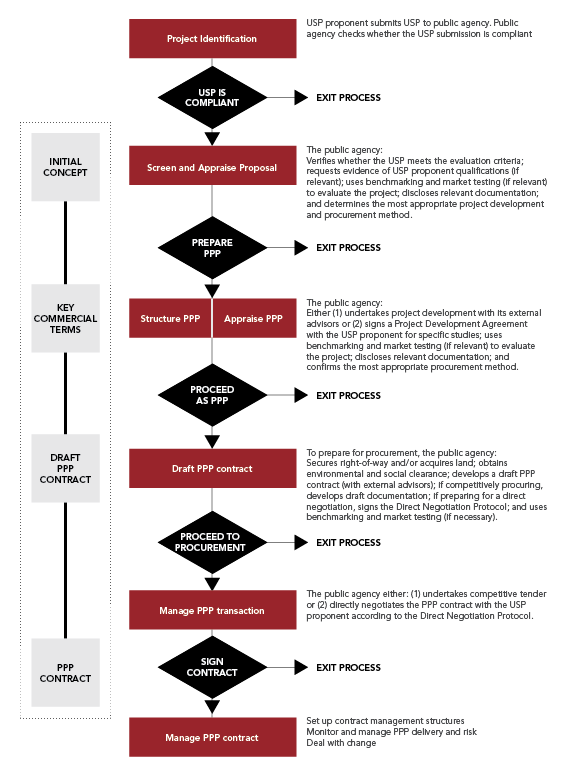 First, a private company submits an unsolicited proposal. A well-articulated submission framework helps to ensure that the USP meets the government’s requirements and is processed efficiently. It also provides guidance to USP proponents in developing quality proposals that comply with the public agency’s requirements.

Then, the public agency evaluates the USP and determines whether to develop it in greater detail. A well-articulated USP evaluation process ensures that only projects that meet public objectives and basic feasibility criteria are considered for the project development stage.

During the project development stage, the feasibility studies will be developed in more detail than the (preliminary) feasibility studies developed by the USP proponent as part of its USP submission. At the end of this stage, the public agency reassesses the project against the same evaluation criteria used during the evaluation stage. Based on the assessment, the public agency determines whether the project should enter the procurement stage.

In most cases, a competitive tender will enable the government to achieve lower final project costs and generate greater value for money. However, some governments may choose to allow USP projects to be directly negotiated with the USP proponent under specific circumstances. Governments also need to determine if any incentive is given to the proponent.

For further details on for the development of a USP policy and for the management of USPs, please refer to the World Bank report on the Framework for Unsolicited Proposals (WB 2017d).