Typical PPP Project Structure shows a typical contract structure for a PPP project. The government's primary contractual relationship is with the project company. This may be complemented by a direct agreement between contracting authority and lenders; although often this relationship is limited to the provisions in favor of the lenders included in the PPP agreement, such as step-in rights or senior debt repayment guarantees.

As shown in Typical PPP Project Structure, the project company contracts with firms to manage design and construction (usually known as an Engineering, Procurement and Construction, or EPC contract), and operations and maintenance (O&M). These contractors may be affiliated with the equity investors. Yescombe's book on PPP finance includes examples of PPP structures for different types of PPP (Yescombe 2007, section 1.4). 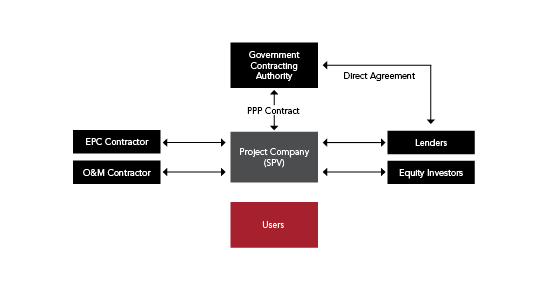 The financial modeling for the PPP project will tailor debt service and expected dividends according to the expected flow of funds, including revenue from user fees and government payments, and construction and on-going expenditures, namely for maintenance and operations. See Flow of Funds for the typical flow of funds in a PPP.

There is a large literature on project finance structures, including several comprehensive textbooks listed in the key reference table for readers interested in exploring the subject further. 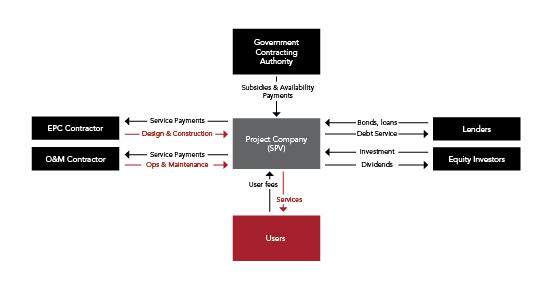 While helpful for raising finance for large, highly leveraged investments, project finance comes at a cost. Interest rates for project-finance debt are more expensive than government borrowing, and often more expensive than borrowing by established companies. The transaction cost—setting up the contractual structure, and carrying out adequate due diligence—can make it unattractive for smaller deals. For this reason, many smaller PPP projects do not adopt non-recourse project finance structure to achieve greater contractual flexibility, or lower the financing cost.

One option is for project shareholders to back up the project company by providing a corporate guarantee to the lender for repayment for all or part of the project debt. Examples of Project Finance Structure with Corporate Guarantees provides examples.

Large infrastructure companies can structure the financing of their projects either through traditional full recourse corporate finance or through limited recourse project finance. If the corporate finance route is followed, the lenders provide loans directly to the parent company, on the strength of its credit rating and balance sheet. In case of default the lenders have full recourse to the balance sheet of the company but their loan is generally unsecured, which means that it is not backed by a specific asset. In project finance, a special purpose company (SPV) is created to hold the assets of the project exclusively. The SPV is owned by the infrastructure company and other equity investors. Lenders provide loans to the SPV. Their recourse in case of default is limited to the cash flows generated by the assets of the SPV but not to the balance sheet of the equity investors. On the other hand, lenders will typically have security over the assets of the SPV.

In general, investors prefer limited recourse, because the risk of the project is limited to the equity they put in the SPV company. The cost of debt is generally higher, but the risk is circumscribed.

From the public sector standpoint, if the limited recourse project finance route is followed, it is important to ensure that the SPV is not too thinly capitalized, that is, the debt/equity ratio should not be too high. Otherwise, the investors’ interests might not be aligned with those of the public sector, and financial close might be difficult to achieve. In addition, project finance induces lenders to focus on the PPP project assets and their ability to generate cash flows—implying that lenders will implement better due diligence, and that they may later create an additional layer of protection to the public interest by exercising step-in rights in order to guarantee service delivery according to standards.

From the lenders perspective, limited recourse project financing will often not be sufficient. They will typically require additional credit support from the PPP company shareholders and/or third parties. Monoline insurance companies were widely used for this purpose before the 2008 global financial crisis. Sometimes, lenders will ask for step-in rights in case of default. In full recourse schemes, the only drawback is a potentially long and complex process for redress, especially if the investors’ parent company is based overseas.

Non-Recourse and Full-Recourse Corporate Project Finance Structures presents the structures for full-recourse corporate and non-recourse project finance. These two cases are not the only financing structures available. PPP financing is actually quite diversified. In some countries with less developed financial institutions, where project finance is not common, but where contracting authorities wish to design good PPP arrangements, investors are required to create a PPP company (the SPV), which then obtains loans with guarantees from the PPP company shareholders. A World Bank report on PPP financing in Latin America (WB 2017b) describes some of these financing arrangements. In countries with more developed financial markets, large investors do finance the PPP projects with their own resources (obtained through full recourse corporate finance) and later, after construction is completed and construction risk disappears, they issue project bonds to the financial markets. 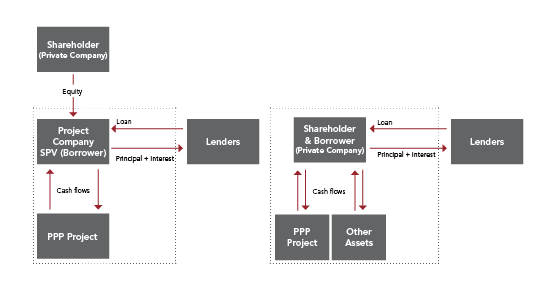 In some cases, a project company may be unable to raise finance on a non-recourse basis. One option is for a major project shareholder to provide a partial or full guarantee on the project debt. For example:

Another alternative to lower the cost of finance for a PPP is for the government to participate in the finance structure, as described in The Role of Public Finance in PPPs under Considerations for Government. The government—or a government-owned financial institution—could provide finance as a lender to the project company, or could provide a guarantee to some, or all, of the project debt.

Alongside the conventional system, the Islamic financial market has emerged as an increasingly relevant method for financing PPPs. According to the Africa Islamic Economic Foundation, Islamic financial institutions have accumulated significant liquidity, and are looking for quality projects to invest in high quality medium to long-term investment opportunities. As such, Islamic finance presents a relatively untapped market for PPP financing. But there is a more fundamental reason for the growth in and appeal of Islamic finance—during the 2008 global financial crisis, financial institutions and structures that were Sharia compliant performed far better than their conventional counterparts. The two key features of Islamic finance that bring better stability are: transactions are asset-backed or asset-based (as trading of debt is prohibited); and they are based on risk-sharing principles.

Sukuk (bond-like structures) allows for co-ownership of productive resources (underlying assets). As a result, the income to sukuk-holders is generated by the actual underlying business activity and hence is considered profit rather than interest. The APMG PPP Certification Guide (APMG 2016, Annex B) presents a description of Islamic financing principles and products that may be used for PPPs. Islamic project finance requires careful design of sukuk that is well-adapted to each specific project and the financing instruments being used, such as istisna (construction financing during development phase) and ijara (lease financing during operational phase).

Typically, an istisna agreement is signed between the Islamic financier and the project’s SPV to procure the construction of a PPP asset by entering into a direct agreement with its construction contractor. Once the asset has been constructed, the SPV delivers it to the financier at a pre-agreed price. This is followed by ijara, whereby a lease (with usufruct rights) of the same project asset is granted by the financier to the SPV. The ijara contract typically includes a promise by the Islamic financier as lessor to transfer ownership of the leased asset to the lessee either at the end of the lease period or in stages during the term of the ijara. An example of this type of arraignment is the Queen Alia International Airport, a 25-year concession in Jordan (IsDB and WBG 2016). An Islamic structure co-financed the project with a $100 million istisna combined with a forward lease under the ijara structure—it should be noted that in the co-financing, Islamic financing ranked pari passu (at the same level of seniority) with conventional senior lenders.

If the transfer of ownership of tangible assets is not allowed or possible, the beneficial rights contained in the project agreement can be assigned to the Islamic financier. For instance, in the Hajj Terminal Expansion Project (IFC 2013) in Jeddah, Saudi Arabia, the Saudi Arabian Civil Aviation Authority, the Islamic Development Bank, and IFC used a Sharia-compliant Build, Transfer, and Operate (BTO) concession model. The Islamic financiers purchased the beneficial rights under the BTO agreement, and then, as lessors, entered a forward lease agreement (ijara) with the project company under which the rights under the BTO agreement were assigned to it in return for rental payments.

As equity, by definition, is compliant with Islamic financial principles, it is invested either directly by sponsors or by Islamic infrastructure funds (mutual funds or unit trusts) in PPP projects. Equity could also come from sukuk as mudarabah (profit sharing trust financing—with no role in management decision-making) or musharakah (equity financing similar to a joint venture model). Takaful (Islamic insurance based on the concepts of cooperative risk sharing amongst the members) funds can also provide an alternate mode of financing PPP projects.

The following additional references provide a starting point on this subject: