The concessions, Build-Operate-Transfer projects (BOT) and project Design-Build-Operate (DBO) are forms of public-private partnerships (PPP). For definitions of each type of agreement and their main features and get examples for each of them, please read the following. You will also find links to the checklists, toolkits and information about the PPP sector.

A concession granted to an operator's long-term right to use all public service assets attributed to him, including the responsibility for the entire operation and investment, but the public authority retains the ownership of assets. At the end of the concession period, the assets revert to public authority, including those acquired by the operator. In a concession, the operator usually clears its revenue directly from consumers. Therefore, it has a direct relationship with that consumer. A concession covering the entire infrastructure system and may include the operation of existing assets by the operator as well as the construction and operation of new assets.

Project Build-Operate-Transfer (BOT) is usually used to develop a particular asset rather than an entire network. Generally, it is completely new or blank in kind (although it is possible to integrate the renovation). In a BOT project, the company or the project operator usually clears its revenue through a levy paid by the public service / government rather than through rates charged to consumers. A number of projects are called concessions, such as toll road projects newly built and are relatively similar to the BOT.

In a Project Design-Build-Operate (DBO), the public sector owns and finances the construction of new assets. The private sector designs, builds and operates the assets to achieve certain objectives. The record for a DBO project is generally easier to make that case for a project or for a BOT concession to the extent that any financing document is necessary. It will usually consist of a performance contract public works as well as a management contract or a section added to the contract covers operation. The operator takes no financial risk and will be paid the design and construction of the plant and then collect operating costs for the operating period.

This section examines in more detail the concessions and BOT projects. It contains references to the Power Purchase Contracts to Supply Fuel Contracts / Wholesale and Installation Contracts  œuvredont use is widespread in the context of BOT projects which include power plants.

This section does not address the complex range of financial documents generally present in any concession or BOT project. 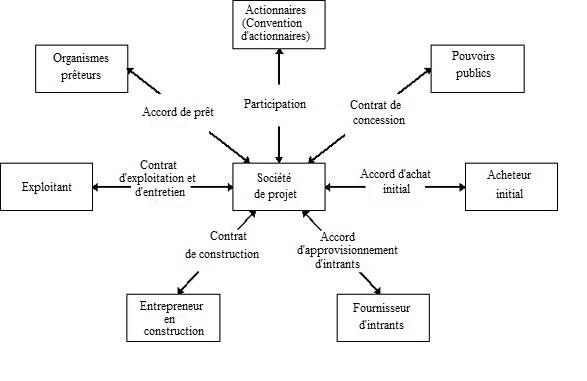 Each project will adopt a variant of this contractual structure according to its specific needs: BOT projects do not require all the guarantee of a supply of inputs; therefore, a supply agreement inputs / fuel is not necessarily required. It is possible that the flow of payment comes in whole or in part tariffs of the general public rather than an initial buyer.